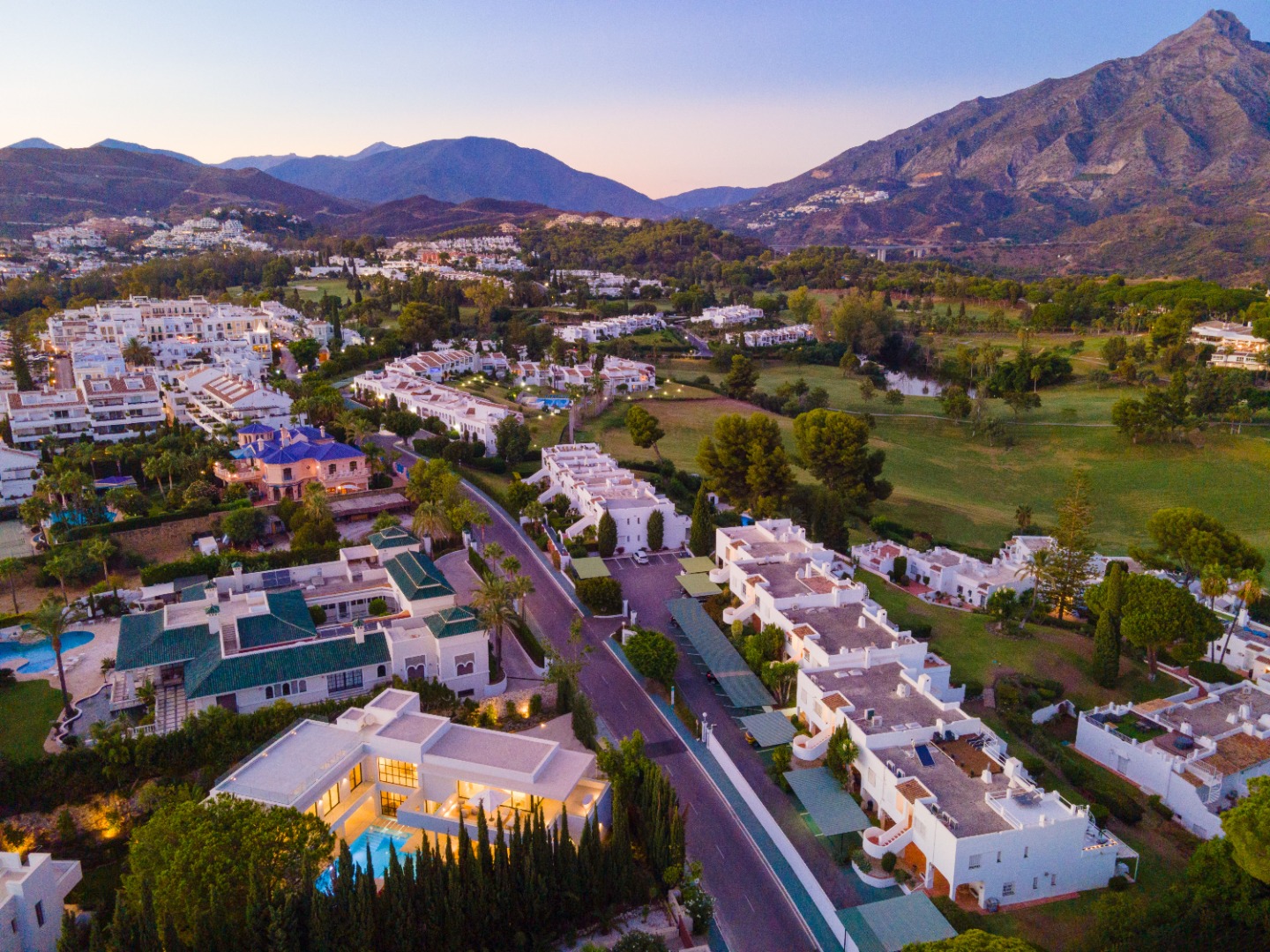 Nueva Andalucía; the Beverly Hills of the Costa del Sol

The largest neighbourhood under Marbella’s umbrella, Nueva Andalucía has a population of around 15,000 which typically rises considerably during the summer and holiday seasons.

Created by the same developer who designed and constructed the marina in Puerto Banús, (and its namesake) José Banús Mas, Nueva Andalucía began developing in the late sixties. Although a veritable maze of residential streets, Nueva Andalucía is highly accessible from the motorway and surrounding towns, having multiple entrances from all sides.

Often coined as the lucrative Beverly Hills of this region, Nueva Andalucía is a place where people purposely drive to look at the sumptuous and opulent homes that define it. Stretching inland from Puerto Banús and backdropped by the iconic La Concha mountain, Nueva Andalucía is peppered with golf courses, lakes, and plenty of hillside opportunities for the most stunning views in the area.

Sophisticated affluence is in abundance here, this being well represented by the luxurious, architecturally-outstanding villas, gated urbanisations and golf-side apartments that nestle comfortably in tranquil spaces amidst this undulating terrain.

Aloha: A mature, well-established residential area at the west of Nueva Andalucía, housing the renowned Aloha Golf Course at its epicentre, Aloha provides an abundance of frontline golf properties with fantastic views of both mountains and fairways alike. With one of the most successful and prestigious international schools in Spain on its doorstep, Aloha has been voted as one of the top places to live in Andalucía. This catchment area has increased vastly in popularity and exclusivity in the last ten years with modern, designer villas and luxury apartment developments rising to the demand, as well as gourmet restaurants, exclusive bars, clubs, boutique shops and delicatessens.

Here you will also find Aloha Pueblo which is its own little town within a town. Nestled in a prime position overlooking Aloha and Royal Las Brisas Golf Courses the Pueblo is home to almost 200 homes and commercial businesses which service the community here. The pueblo was constructed similarly to other urbanisations but built to represent an Andalucían village featuring gardens, squares, fountains, and cortijos. The designers opted for colourful facades, as opposed to the typical white villages that Spain is so famous for, giving Aloha Pueblo its unique appearance.

Las Brisas: Another highly regarded golf club where membership appeals to those with a royal status! The course, and affluent surrounding area, is lined with stunning villas (as well as luxurious apartments), many of which have followed the recent golf valley trend of leaning towards more contemporary architecture, and will set you back a few million euros. This is a quiet residential area, originally popular with retirees, but the modernisation and development here has shifted that focus somewhat in recent years, making it a highly sought after area for families and second/holiday homes.

Los Naranjos: The world-famous Los Naranjos golf course has been a landmark in Marbella since 1977. Twice being awarded course of the year on the Costa del Sol, Los Naranjos has played host to several major competitions. In keeping with this reputation, the homes that line the greens and fairways are nothing short of spectacular. There is a wide range of frontline golf property here with luxurious contemporary villas juxtaposed with more traditional options fetching well over €5,000,000, as well as three-bedroom townhouses, and spacious apartments.

Despite the global pandemic restricting the flow of tourism and not permitting people in to the country to purchase real estate, the effect of the coronavirus on the property market here has not been as devastating as expected. The continued buoyancy of the real estate market in Marbella coincides with reports suggesting that “in the second quarter of this year, disposable incomes in the G7 group of large economies, which includes the USA, UK, France and Germany, were around $100bn more than they were before the Covid-19 pandemic”, as stated by The Economist.

“Turnkey” homes are also far more in demand than in previous years, Solvilla, Marbella claimed that “the time from reservation to completion has been less than half the normal duration. Previously, the standard time was two months but in recent weeks some transactions have been completed in 48 hours. People are seeking an instant pleasure – a home that is ready to enjoy as soon as the keys are in your hands”.

The Global Pandemic and the Tech Effect

Real Estate sales have not been as restricted as imagined as buyers have been able to view properties virtually, transfer funds digitally, and sign paperwork online. This extraordinary situation has inspired many people, who are now working online and remotely, to be able to relocate almost permanently. To purchase homes in more alluring locations, houses with plenty of entertainment built-in, where the home is not simply a dwelling but more a lifestyle centre. Home gyms, spas, cinemas, and domotics are all in high demand and the modernisation and development of contemporary homes in Nueva Andalucía does not disappoint on this front. Private pools, landscaped gardens, and plenty of space for guests all as standard in the luxury homes available in the area.

The incredible lifestyle and climate that Marbella is famous for is now more important and desirable than ever and driving people towards buying second homes or holiday homes in prolific areas such as Nueva Andalucía.